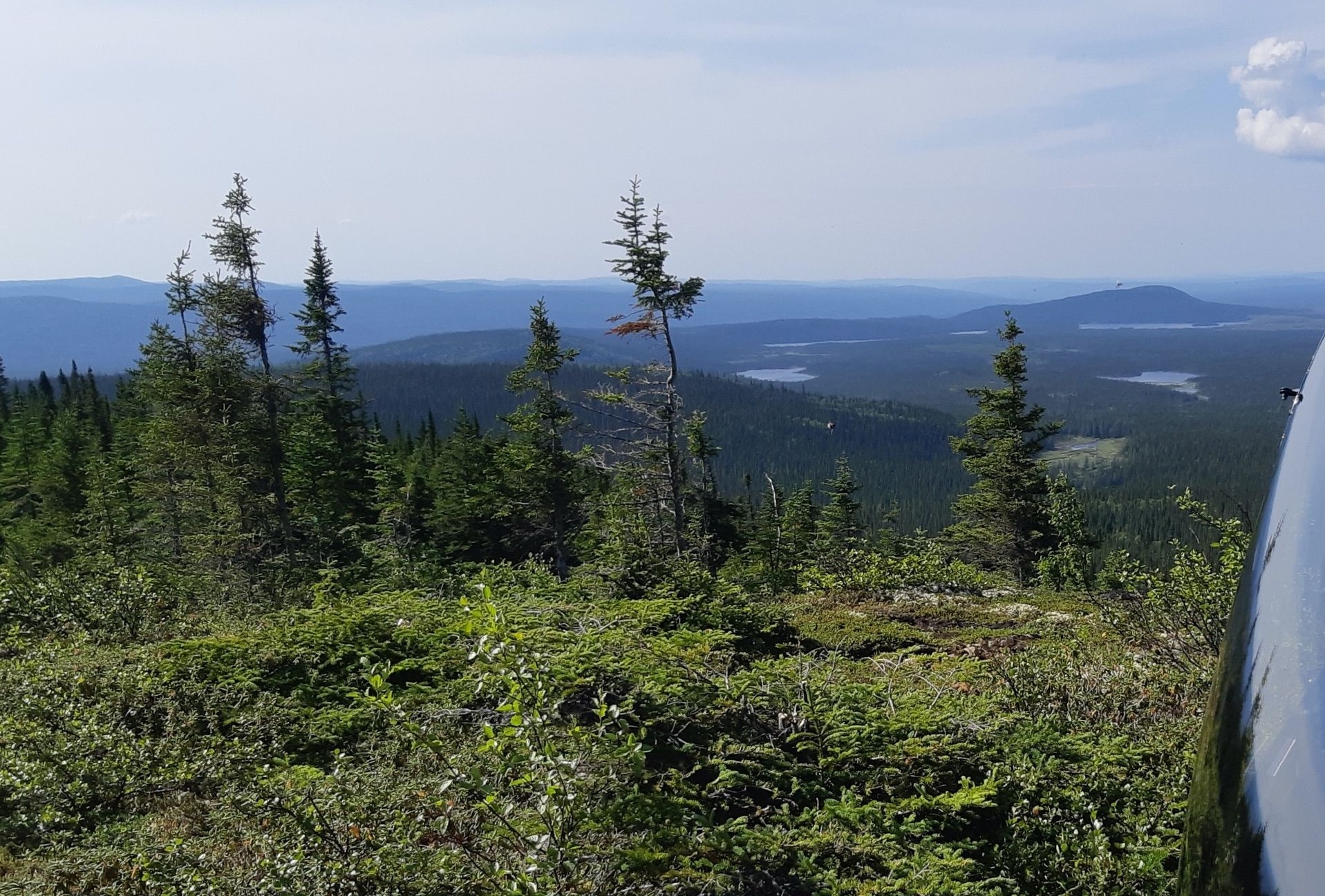 Few areas on earth are as synonymous with iron ore exploration and production as Canada’s famous Labrador Trough. This historic and prolific region that runs through western Labrador through to northern Quebec boasts a long production history of more than 60 years of profitable operations, producing more than two billion tonnes of iron ore. It’s no wonder the Labrador Trough is often called “Canada’s premier iron ore district.” And, for good reason.

Vastly underexplored on a district scale, resource estimates of more than 80 billion tonnes of known iron ore resources remain in the ground throughout the Labrador Trough…offering excellent exploration potential. The region is an easy entry point into the seaborne markets of Europe, Asia, the Middle East, and North America along with “Common Carrier” rail to the deep-water port of Sept Isles with excess capacity. Lastly, the superior quality and grade of the ore in the Labrador Trough – relative to Australian and Brazilian product – offsets the potential freight disadvantages for China markets.

High Tide has acquired high potential mineral assets adjacent to existing production infrastructure in world-class and development-friendly jurisdictions with a focus on essential commodities required for infrastructure development and renewable energy technologies. The company says it is positioned to rapidly advance the development of its assets through strategic partnerships and aggressive project management.

The company owns a 100% interest in its flagship Labrador West Iron Project located 20 kilometres and adjacent to IOC / Rio Tinto’s (NYSE: RIO) 23 million tonnes per year Carol Lake Mine in Labrador City, along with the Lac Pegma Copper-Nickel-Cobalt Project in Quebec, straddling the border with Labrador.

Explored and drilled by Rio Tinto Exploration from 2010 to 2012, and by then-private High Tide in 2020, with twenty-two core holes and approximately 5,200 metres of drill core logged and assayed, the deposit has already been significantly de-risked and ready for rapid advancement. Located only twenty kilometres northeast of Labrador City, the Labrador West Project is proximal to all the critical infrastructure required to explore and develop a major new iron deposit in the heart of the southern Labrador Trough which is currently home to four operating iron mines.

Located about fifty kilometres southeast of nearby Fermont, Quebec, the Lac Pegma project is a magmatic sulphide copper-nickel-cobalt deposit that was first discovered in 1955 and drilled in 1996. High Tide was very active at Lac Pegma throughout 2021 engaging in multiple campaigns with work that included; staking an additional ~1800 hectares of very prospective land along strike of the main deposit, flying a heliborne high-resolution magnetic and time-domain electromagnetic survey over the entire project area, prospecting, mapping and sampling historic and recently found outcrops, ground truthing new geophysical anomalies and recovering the 1996 drill core which was subsequently relogged and resampled.

In early June, the company announced a drilling update for the Labrador West Iron Project. To date, the company has finished three of the planned 6-to-8 HQ-diameter diamond drill holes for a total of over 1,000 meters drilled.

“We have almost completed our fourth hole, which is approximately at the halfway point of the program and we are very pleased that sample shipments have begun. I want to thank the entire exploration team who have worked very hard, in a dedicated and safe manner, under challenging spring weather conditions,” Steve Roebuck, interim CEO of High Tide Resources, said in a press release.

“As High Tide prepares to go public it is essential to establish a dedicated board of directors who possess expertise with the commodities, the geology, and the jurisdictions in which we are advancing our projects. I am delighted to welcome this group of talented mining people to the Board, and I look forward to utilizing their expertise and guidance as we build High Tide into a provider of metals and minerals which are critical for building a sustainable, lower carbon, and greener economy. At this time, I would like to thank the Avidian Directors James Polson, Doug Kirwin, and Dino Titaro who are stepping down from the Board. Their help in getting High Tide launched has been much appreciated”.

With over 30 years of experience, Stephen is currently a Managing Director of an investment banking advisory firm in Toronto, Canada where he provides strategic advice and financial analysis to mining companies globally in their evaluation of strategic transactions.

Steve is an experienced executive and CEO of High Tide’s largest shareholder Avidian and a Professional Geologist with over 25 years of experience in the mining and exploration industry including open-pit and underground mine operations, PEA and feasibility studies, exploration programs, and mine development. Steve has extensive iron ore experience having drill-defined over one billion tonnes of iron ore at the Tuktu and Roche Bay iron ore deposits in Nunavut, Canada. Steve received his Bachelor of Science degree from Concordia University in 1994 and is a registered Professional Geoscientist with the Association of Professional Engineers and Geoscientists of Newfoundland and Labrador (PEGNL).

Steve has a diverse background with both open pit and underground production experience having worked for Royal Oak Mines and BHP Billiton in the Northwest Territories and exploration experience working for Placer Dome, Aur Resources, and Advanced Explorations Inc (iron ore) in Quebec and Nunavut. More recently Steve has taken on executive roles having been President of Scorpio Gold and is currently President and CEO of Avidian Gold.

Over 25 years of experience specializing in the areas of financial reporting, controls, and administration. Has held the positions of CFO and Controller for several mineral exploration companies including Unigold, Intrepid Mines, Metalla Royalty & Streaming, Firestone Ventures, and Aurania Resources.

Joe has extensive experience working in the Labrador Trough having worked for 15 years with ArcelorMittal Canada (the former Quebec Cartier Mining Company) as Director of Technology-International. During his time with Bethlehem Steel, he served on the Technical Committee of IOC (Iron Ore Company of Canada). More recently, he has advised on several iron ore operations and projects in the region.

Serge Pelletier is a veteran mining engineer who graduated from the Montana School of Mines in 1994. Upon graduation, Serge joined BHP World Minerals at its New Mexico Operations. Following two years in New Mexico, Serge and his family moved around the world for BHP; Mali, Australia, Canada (NWT), South Africa, Canada (Saskatoon), US (Houston) before retiring in 2016 as the Manager of North America Closed Sites.

In 2018, he took over the Reconstruction Office in Lac-Megantic, Quebec to help rebuild the town after the train derailment disaster of 2013. During his career, Serge was involved in large mature mines, small operations, corporate offices, and exploration projects. During his tenure with BHP, Serge worked extensively in community relations with multiple stakeholders including municipal, provincial, state, and federal governments including First Nations.

Carol was born and raised in Labrador City and received a Bachelor of Science degree with Honors from Memorial University of Newfoundland in 2003. Since this time, she has been working as a geologist with Canadian junior mineral exploration companies where she has gained valuable work experience both in Canada and internationally in the mineral exploration field. Carol is a registered Professional Geoscientist with the Association of Professional Engineers and Geoscientists of Newfoundland and Labrador (PEGNL) and currently works as a senior geologist with Altius Resources Inc. Through her role with Altius and internships at the Iron Ore Company of Canada, she has gained extensive experience working throughout the Labrador Trough on various iron ore exploration projects and was the project geologist for Altius’ Kami and Julienne Lake iron ore projects.

The global market for iron ore is estimated at 2.3 billion metric tons this year and is projected to reach a revised size of 2.7 billion metric tons by 2026, growing at a CAGR of 3.7% over the analysis period. That’s a lot of ore that the hungry steel market needs to devour.

After going public on the CSE in late February after its spinout from Avidian Gold, High Tide Resources Corp. equates to an early-stage play offering real value and opportunity, arguably, the best iron ore producing region on earth.